A mid-Cretaceous embryonic-to-neonate snake in amber from Myanmar 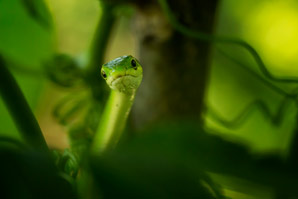 Snake skeletons found in marine and river sediments reveal that snakes had already slithered around the globe by 100 million years ago. But the fossil record remains sparse due to the fragility of snake bones.

Now, a team that included researchers from Flinders University analysed a small but perfectly preserved headless skeleton of an unlucky snake that had become trapped in tree sap. The amber tomb was discovered at a market in Myanmar in 2016.

The team used powerful X-rays to analyse the tiny back bones and found that their size and shape closely matched those of newborn Asian pipe snakes, suggesting that snake skeletons have changed little in 100 million years.

This rare find is the first evidence that early snakes thrived in forests, and provides detailed data for studying snake diversity in the Cretaceous period.