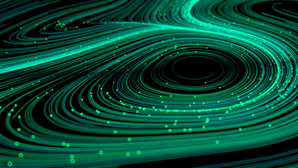 Scientists have built a miniature particle accelerator that can recycle some of the laser energy fed into the system to boost the accelerated electrons’ energy a second time.

Terahertz-based accelerators, which use radiation that lies between the infrared and radio frequencies in the electromagnetic spectrum, have emerged as promising candidates for next-generation compact electron sources. However, their performance has been limited by the relatively short section of interaction between the terahertz pulse and the electrons.

Now, researchers from the University of Hamburg in Germany have developed a device that uses a longer pulse comprising many cycles of terahertz waves, extending the interaction section with the particles to the centimetre range.

Just 1.5 centimetres long and 0.8 millimetres in diameter, the device could provide a new electron beam source for medical imaging applications, including ultrafast electron diffraction and microscopy and ultrafast X-rays.