Search for Invisible Axion Dark Matter with a Multiple-Cell Haloscope 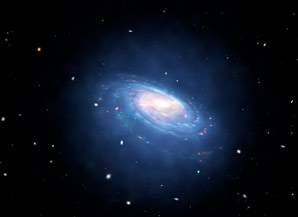 A new detector may help speed up the search for an elusive particle that could solve some of the greatest mysteries of modern physics.

First proposed in 1977, the axion is a hypothetical particle that may be the source of the mysterious dark matter, which physicists believe accounts for 85% of the total mass of the Universe. But the axion has defied detection, despite decades of searching.

Now, a team of six researchers from the Institute for Basic Science in South Korea and a collaborator have devised a detector that could look for axions in certain frequency ranges four times faster than the most sensitive detector to date.

The detector has a sliced-pizza-like arrangement of partitioned cavities. This design enables it to look at high frequencies without sacrificing detection volume.