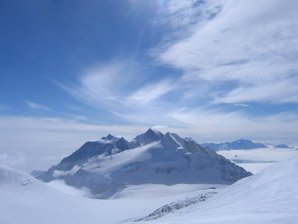 Dust from a supernova explosion that occurred sometime in the last 20 million years has probably been deposited in Antarctic snow in the last 20 years.

Since iron-60, a rare isotope of iron, has a half-life of 2.6 million years, traces of it left over from when the Earth was formed should have long since vanished. Thus, any iron-60 found on Earth most likely originated from interstellar space.

Now, a team that included four researchers at the Technical University of Munich scooped up half a tonne of snow that fell within the last two decades. After transporting it back to Germany, they melted it and used mass spectroscopy to analyse solids present in it.

The researchers found about 73,000 atoms of iron-60 — far more than would be expected from terrestrial sources or sources within our Solar System. They concluded that it most likely came from a supernova in a nearby galaxy.