Ecology of the collapse of Rapa Nui society. 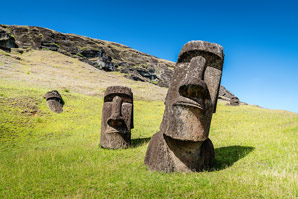 The collapse of the Rapa Nui (Easter Island) society may have been more closely linked to climate change than conflict.

Their results suggest population decline set in before foreign settlers arrived and was due to droughts putting strain on food production.

Understanding the effects of past climate change on sensitive societies could help such populations better prepare for their own sustainability challenges.