Synchrotron X-ray absorption spectroscopy of melanosomes in vertebrates and cephalopods: implications for the affinity of Tullimonstrum 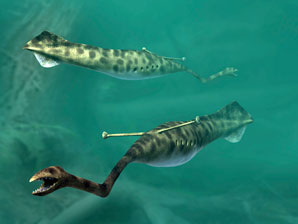 The chemical compositions of fossilized eyes could bring us closer to solving the mystery of a bizarre extinct beast.

Approximately 300-million-year-old fossils of Tullimonstrum, or ‘Tully Monster’, reveal a bizarre slug-like aquatic creature with a long, clawed appendage where its mouth should be. Whether Tully was a vertebrate, like mammals and reptiles, or an invertebrate, like crustaceans and octopuses, is still debated.

A team led by researchers from University College Cork used a particle accelerator to compare the chemical properties of eye melanosomes — cell structures containing the ultraviolet-screening pigment melanin — in modern and fossil vertebrates and invertebrates, from sea bass to squid.

They found that across both existing and fossilised species, vertebrate eye melanosomes contained a higher ratio of zinc to copper than those of invertebrates. As for Tully, this ratio was closer to that of invertebrates.

Studying melanosome chemistry in many more invertebrates could help narrow down what type of animal Tully actually was.