Reproductive control via the threat of eviction in the clown anemonefish. 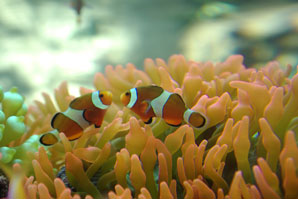 Clownfish show sexual restraint when threatened with eviction from the anemone.

Among some social animals, competition to reproduce can become potentially violent when resources such as food and space are limited. The dominant couple may deter others from reproducing by threatening to evict them from the group, but it hadn’t been clear whether this threat alone is enough.

A team that included researchers from the University of Wollongong introduced mature (sexually active) or immature (not yet sexually active) clownfish to the anemones of established breeding pairs on wild reefs around Papua New Guinea and observed the hosts’ response. The clownfish couple were seven times more likely to shun sexually active intruders than immature fish, thereby creating a credible threat that would incentivise reproductive restraint.

Such interactions could explain how groups with one monogamous pair and several non-breeding individuals can emerge in the animal kingdom.