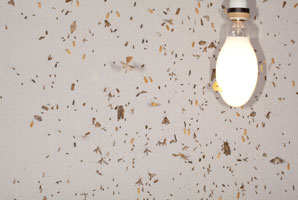 The Gum Leaf Skeletoniser moth, or Uraba lugens, has a competitive edge when it comes to the dating game — it can trade in its testes for a better sense of smell to sniff out potential mates.

A team led by scientists from the University of Melbourne collected Uraba lugens eggs and grew them in containers at varied densities and numbers.

The males surrounded by a greater number of other larvae grew larger testes, the researchers discovered, and those reared at a lower density had larger antennae as adults.

The traits make sense – larger testes allow moths to fertilize more females when sperm competition from other males is high. And when females are harder to find, males have to better detect the pheromones of a potential mate, which they sense using their antennae.

The scientists propose that Uraba lugens sense the population around them when they are larvae, allowing them to invest energy in the optimal traits for reproduction as they mature.