Cohabitation promotes high diversity of clownfishes in the Coral Triangle 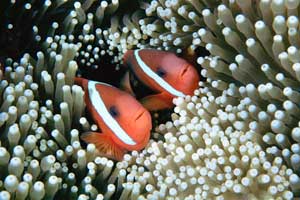 The Coral Triangle, which covers the tropical seas of South-East Asian nations in the Western Pacific Ocean has been identified as the hub of diversity for clownfish. The lack of available ‘housing’ in this species-rich zone has forced different species of clownfish to live in harmony within the same anemone, rather than competing for limited resources, an Australian–UK research team find.

The team, which included researchers from Curtin University, studied 20 different locations in the triangle and more than 1,500 individual clownfish between 2005 and 2014. They found the congenial living arrangements were possible thanks to a surprising lack of aggression from the dominant species and acceptance by subordinate clownfish at being relegated to the fringes of the anemone.

The Coral Triangle has the world’s highest concentration of marine life within its 5.7 million square kilometres of water and is famed for its biodiversity. “Protecting these microhabitats and preserving cohabiting relationships is important to conserving this global centre of marine biodiversity,” says Emma Camp, the study’s first author.