Intertwined signatures of desiccation and drought tolerance in grasses 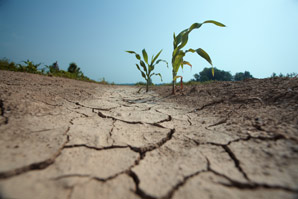 Drought-tolerant grasses derive their hardiness from changes in the expression of a handful of seed-related genes.

Major crops such as wheat, corn and rice are grasses, so understanding these pathways could help engineer more resilient crops.

Seed-related genes are activated in plants lacking water, but it is not clear whether these changes are a response to water stress or a desiccation-tolerance pathway.

To address this, a team led by researchers at the University of Cape Town grew a desiccation-tolerant and a desiccation-sensitive species under drought conditions and monitored the changes in gene expression in response to the lack of water.

They found that changes in the expression of seed-related genes were broadly shared between the tolerant and sensitive species, but a small set of genes only changed in the sensitive species.

The analysis also showed that many of the expression changes resulted from altered methylation, which may be a sign of chromatin remodelling.