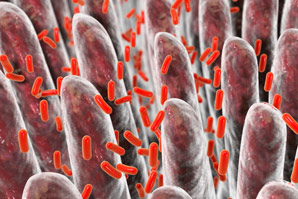 Microbes living in the guts of mice can influence glucose metabolism in the body by communicating with hormone-producing cells that line the intestinal wall.

The finding, from a team co-led by Flinders University scientists, helps explain how bacteria in the gut can contribute to metabolic conditions such as diabetes that result in high blood sugar levels.

The researchers showed that mice treated with antibiotics, which wipe out gut flora, were better able to process glucose — as were mice blocked genetically or pharmacologically from producing gut serotonin, a hormone involved in regulating metabolism.

Notably, the combined targeting of both gut microbes and serotonin synthesis did not show any additive effects, demonstrating that the bacteria and hormone signalling operate through a common pathway to affect sugar levels.

A better understanding of the molecular signals used by bacteria to trigger serotonin production in the gut could lead to novel therapies for obesity and diabetes.