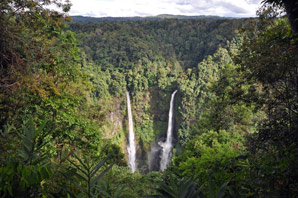 The missing crater from a massive meteorite has been found beneath lava fields on the Bolaven Plateau, Laos.

When a meteorite struck Australasia 790,000 years ago, it flung black, glassy blobs of melted Earth rock called tektites far and wide across the Eastern Hemisphere. The impact crater has eluded discovery for a century, though it was suspected to be somewhere in Indochina.

A team that included researchers from Nanyang Technological University has analysed the chemistry of 241 widely dispersed tektites. Traces of basalt enabled them to narrow down crater’s location to a volcanic region of southern Laos; the Bolaven Plateau.

The team dated the lava layers above the proposed site and confirmed that they were all younger than the impact.

Finally, the researchers measured the gravitational field over the site, which revealed a 15-kilometre-wide crater could indeed lie buried there beneath a few hundred metres of lava.