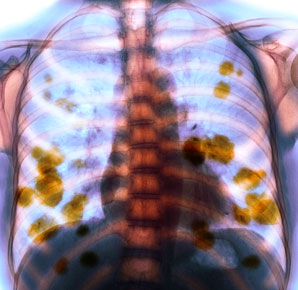 Tumour cells that have separated from aggressive cancers and settled in the lungs can be destroyed by turning on a receptor that attracts killer immune cells, an international team led by Sichuan University have shown.

Studies have identified oestrogen receptor beta (ERβ) as a potential drug target for treating lung metastases from aggressive cancers, like triple-negative breast cancer and melanoma. The team gave mice with lung metastases from these two tumours the compound LY500307, which turns on ERβ. This released interleukin 1 beta (IL-1β) from the tumour cells, which attracted cancer-killing white blood cells called neutrophils. The number of tumour nodules in the mice treated with LY500307 was significantly lower than in untreated mice, and they survived longer.

These findings suggest that drugs that turn on this receptor could play a role in treating cancer patients with metastasis.