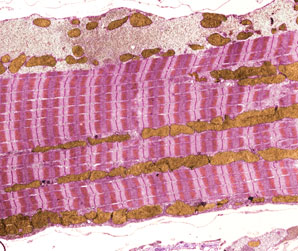 A regulatory RNA involved in the repression of muscle development in mice has been discovered. This finding could lead to new treatments for muscle-related diseases.

Many long RNAs that do not code for proteins have been identified in muscle, but their roles are mainly unknown.

Now, researchers at Huazhong Agricultural University in China have identified a long non-coding RNA molecule that is highly expressed in skeletal muscle cells of mice. Dubbed SYISL, the RNA interacts with a protein complex to silence genes involved in the differentiation of muscle precursor cells into more specialized cell types.

Mice lacking SYISL had increased muscle mass and a greater density of smaller muscle fibres. This raises the possibility that the RNA may be involved in human diseases such as rhabdomyosarcoma that are caused by a similar abnormal proliferation of muscle cells and their incomplete development.