First evidence for silica condensation within the solar protoplanetary disk. 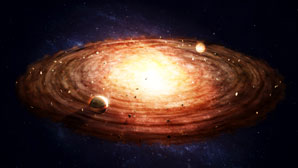 The first evidence of quartz in a meteorite has shed light on silica formation in the early Solar System.

Observations of young stars hint at the emergence of silica, one of the most abundant minerals on Earth, during a star’s formative years, but clear evidence has been lacking.

A team that included Waseda University researchers analysed the mineral make-up of a tiny meteorite found in Antarctica 40 years ago. They discovered crystalline silica, or quartz, that has remained unaltered since it formed a few billion years ago.

The oxygen isotope signature of the quartz suggests it formed close to the newborn Sun, while the mix of minerals in the meteorite imply that it formed at temperatures in the range 900–1,500 degrees Celsius. As the hot cocktail of gases cooled rapidly, it changed composition, becoming richer in silica until the quartz crystallized.

The finding could help explain the origin of silica detected in distant gaseous disks swirling around young stars.