Reverse chemical ecology: Olfactory proteins from the giant panda and their interactions with putative pheromones and bamboo volatiles 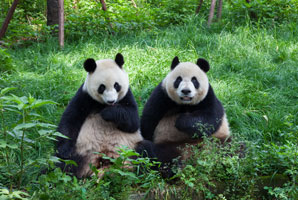 A low-calorie bamboo diet leaves giant pandas with little energy to track down a mate, but clues from the panda’s nose may give the creatures back their scent for survival.

A team including researchers from the Chinese Academy of Agricultural Sciences swabbed the noses of giant pandas and extracted odour-binding molecules from the mucous. These molecules dock to odour chemicals and help shuttle the smell signals to the brain, allowing pandas to sniff out food and potential mates.

The researchers tested which types of chemicals docked to the odour-binding molecules and narrowed down the shape that potential pheromones could take. The scientists then proposed the best candidates — chemicals called long-chain aldehydes and carboxylic acids. Aldehydes, for one, are known insect pheromones and may have a similar purpose for pandas.

The scientists hope that pinpointing the pheromones to which giant pandas respond will lead to new paths for boosting their reproductivity.