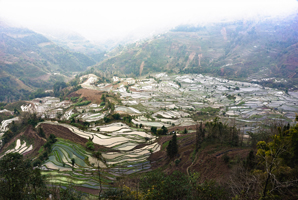 A system of dams, levees and ditches discovered in China’s Yangtze Delta, dated 5,100 years old, may be one of the largest hydraulic engineering projects of its kind in the ancient world.

An international team, including researchers from Peking University, discovered the 300-hectare complex using a combination of remote sensing, archaeological surveys and excavations that uncovered both large-scale earthworks and smaller scale features such as sandbags made of clay wrapped in grass leaves.

The hydraulic engineering endeavour would have supported the densely populated city of Liangzhu and its intensive rice-farming economy that was highly dependent on often-unpredictable monsoon rains.

Researchers estimate that construction of the structures would have taken thousands of labourers around eight years to move nearly three million cubic meters of earth. They believe the system endured for 600−700 years but was eventually overcome by massive flooding in the region.