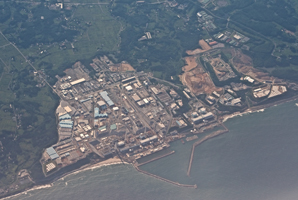 Groundwater beneath sandy beaches continues to be a significant reservoir for radioactive cesium following Japan’s 2011 nuclear disaster, when the Fukushima Daiichi nuclear power plant suffered multiple reactor meltdowns after it was hit by a tsunami.

Eight beaches close to the plant have been sampled by a US-Japan team, including Seiya Nagao from Kanazawa University. The group found that groundwater under all eight beaches contained more radioactive cesium than the water of nearby rivers, inland groundwater reserves or surrounding ocean waters.

It’s suspected that beach sands retained radioactive cesium deposited by highly irradiated seawater in the days and weeks following the disaster and that this reached the water beneath it.

Evidence of this ‘new’ route through which radioactive elements can make their way into the environment will likely help inform future environmental monitoring efforts and emergency planning strategies. The finding is also ripe for further examination as half of the world’s 440 nuclear reactors are found in coastal locations.