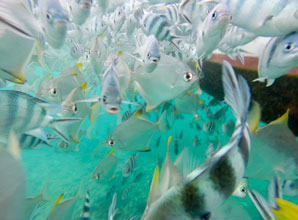 Tropical fish with a voracious appetite for kelp are staking claims in the warming waters of eastern Australia’s temperate coral reefs and stripping ecologically-important kelp forests.

A team, led by researchers from the University of New South Wales, studied video recordings taken at several kelp sites over a ten-year period, during which the water warmed by 0.6 degrees Celsius.

They saw increasing numbers of herbivorous species normally found in tropical and sub-tropical waters, such as rabbitfish, surgeonfish and drummer fish, with a corresponding erosion of the kelp forests. The researchers knew the influx of the tropical species was linked to the loss of kelp because they could see tell-tale bite marks on the fronds.

With kelp forests the “biological engine” that supports many marine ecosystems, the authors warned that climate-induced increases in herbivorous fish pose a significant new threat.