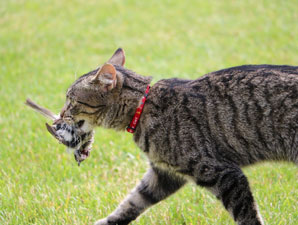 Non-native predatory mammals devastate local vertebrate diversity, and controlling their populations should be a priority for conservation efforts, according to a global analysis of biodiversity loss.

Researchers at Deakin University and other institutes in Australia and New Zealand compiled a list of extinct or threatened bird, mammal, and reptile species on the International Union for Conservation of Nature Red List and filtered it to identify those threatened by mammalian predators. Of about 3750 species on the full list, about 740 were subject to a “major threat” from predatory mammals, which contributed to 58 per cent of all modern bird, mammal, and reptile extinctions. In addition, island species, such as the Amsterdam albatross, were particularly vulnerable to mammal predators.

Rats and cats lead the extinction tally and also threaten roughly 400 species each, with dogs, pigs, foxes and mongooses in a distant second place in both tallies. Controlling the spread and impact of these predators will be crucial to prevent further biodiversity loss.