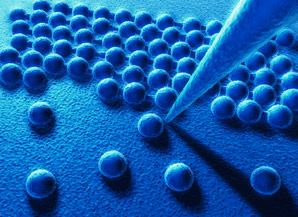 A powerful microscopy technique capable of realizing atomic-scale imaging has been sped up, allowing scientists to scrutinize the rapid dynamics of some important biomolecular processes.

Atomic force microscopy (AFM) generates atomic-scale images by measuring the force generated on a tiny tip as it scans a surface. A high-speed version of AFM has been developed that is capable of observing biological processes with time scales of less than a second, but many key processes are too fast to be captured even by high-speed AFM.

Now, six researchers, all from Kanazawa University in Japan, have made high-speed AFM significantly faster.

They achieved this by redesigning the detector used to measure the movement of the cantilever that the tip is attached to. The team demonstrated that this setup was about four times in imaging actin filaments. It has a further advantage of being less invasive than conventional high-speed AFM.