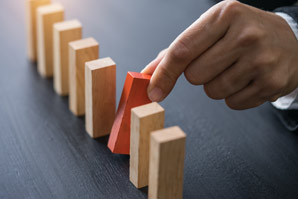 The friction between two objects decreases gradually as the objects start to move at ultralow velocities of just a few tens of nanometres a second, two physicists have found.

Despite being covered in high school physics, friction is a complex phenomenon and physicists still have much to learn about it.

When a stationary object first starts moving, the friction it experiences appears to suddenly drop.

By doing measurements on two steel blocks sliding at a meagre 37 nanometres a second relative to each other, a researcher at Peter the Great Saint-Petersburg Polytechnic University in Russia and a collaborator have explored friction in the intermediate region of this transition between stationary and moving friction.

Their results suggest that the transition between static and kinetic friction is gradual rather than abrupt. The gradual nature of the transition had been hidden in earlier experiments conducted at higher velocities.