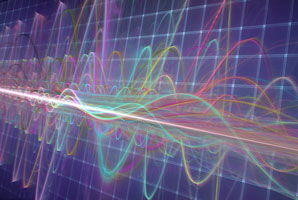 The wavelength of electrons vibrating at the surface of iron can be fine-tuned through a new three-layer system.

Plasmonics uses light energy to excite electrons at the surface of a metal to generate fluctuating electromagnetic fields. An insulating layer traps these electron waves so they can be squeezed through a nanoscale tube called a waveguide, similar to the fibre-optic strands that funnel light.

Researchers at the Tokyo University of Agriculture and Technology and their colleagues designed and tested a three-layer structure of silica sandwiched between a magnetic iron base and an insulating aluminium oxide layer. By simply changing the thickness of the silica layer and the magnetic field of the iron, the researchers could control the resonance of the surface electrons. They reduced the angle of incoming light to the minimum required for generating waves and achieved a wavelength with low energy losses as it travelled through the waveguide.

This system could be built upon to develop plasmonic devices, such as tiny lasers and information transmitters in supercomputers, with better long-range performance.