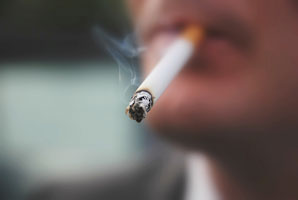 Nicotine can be directly detected in breath without the need for lengthy lab tests.

Breathalysers are commonly used for alcohol tests but on-the-spot screening for smaller molecules found in drugs, usually in saliva, can be unreliable and require further analysis in the lab.

A team including researchers from the University of South Australia made a breathalyser by inserting a porous silicon chip into a straw and used it to capture the breath from a habitual cigarette smoker. Laser excitation of the silicon surface revealed which molecules were present in the breath without interference, and revealed nicotine in the same concentrations as other lab-based screening methods.

The technique represents a promising step towards instant breath analysis for evidence of illegal drugs or biomarkers, molecules that could diagnose diseases.