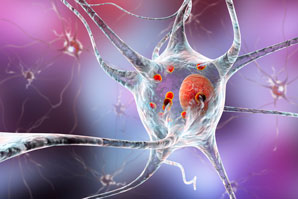 A study of brain tissue from people with Parkinson’s disease, the most common age-related movement disorder, has challenged long-held assumptions about what is inside abnormal brain deposits known as Lewy bodies.

Using cutting-edge imaging techniques, a team co-led by Roche scientists discovered that Lewy bodies consist mostly of membrane fragments, fat-like substances and other debris from cellular organelles — not from fibrous sheets of the protein α-synuclein, as commonly believed.

Although the researchers saw some α-synuclein mixed in among the membranous gunk of the neuronal aggregates, the findings call into question the role of this pathogenic protein in forming Lewy bodies and contributing to neurodegeneration.

A better understanding of how α-synuclein and distorted organelles contribute to Lewy body development could point to new drug targets for Parkinson’s and related diseases.