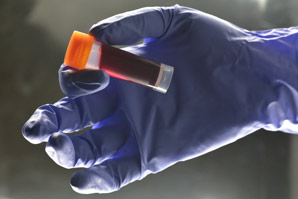 Cancer patients with higher levels of an inflammatory signalling molecule in their bloodstream tend to respond worse to immune checkpoint-blocking drugs.

The finding — from a team led by scientists at Genentech, a Roche subsidiary — point to blood levels of this signalling molecule, a chemokine called interleukin 8 (IL-8), as an easily measurable biomarker for identifying patients most likely to benefit from immunotherapy. It also suggests that combining checkpoint inhibitors with agents that target IL-8 could boost response rates for many patients.

The researchers analysed blood and tumour samples from more than 1,400 patients with cancers of the kidney and bladder who had received atezolizumab, a Roche drug directed at an immunosuppressive molecule found on tumour cells.

The team also determined the source of the harmful molecule — a population of immune cells known as myeloid cells that both circulate in the blood and accumulate around tumours, where they create a microenvironment that suppresses the immune response.