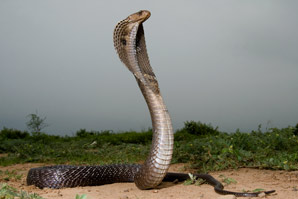 A complete genome map from one of the world’s deadliest snakes could help develop new treatments for snakebite victims.

Globally, about 100,000 people die from snake bites each year. Antivenoms have been developed, but they can be costly to produce.

A team led by scientists at Genentech, a Roche subsidiary, has decoded all 38 chromosomes of the Indian cobra, one of the ‘big four’ species responsible for the most snakebite-related deaths on the Indian subcontinent.

The researchers identified around 23,000 protein-coding genes, around half of which were actively expressed in the snake’s venom glands. Of these, 19 were directly responsible for producing the poisonous brew of toxins, enzymes, growth factors and other proteins that can collectively kill or disable anyone unlucky enough to encounter the cobra’s bite.

With this catalogue of venom-specific genes, the researchers hope to begin developing next-generation antivenoms that can be produced more safely and cost effectively than current snakebite treatments.