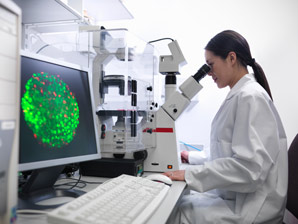 Exploiting a quantum effect has allowed physicists to boost the signals of a bioimaging technique without resorting to using cell-damaging light levels.

Light microscopy allows scientists to uncover the secrets of living cells. However, a fundamental limitation on image quality is the fact that light consists of individual photons, which introduces noise into images and spectra. This noise can be reduced by turning up the light intensity, but high intensities can damage biological systems.

Now, a team led by researchers at the University of Queensland has found a way around this problem by using quantum correlations between photons to extract more information.

Using this method, the team demonstrated a 35% improvement in the signal relative to the noise, allowing them to obtain images of biological structures that could not normally be resolved. They anticipate that this will lead to order-of-magnitude improvements in the signal-to-noise ratio and imaging speed.