The projected timing of abrupt ecological disruption from climate change 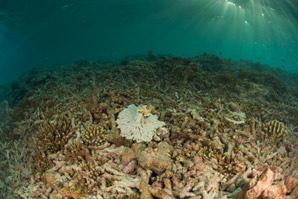 If left unchecked, climate change could cause sudden and catastrophic biodiversity loss in some ecosystems by the middle of this century.

A team led by researchers from the University of Cape Town modelled annual temperature and rainfall between 1850 and 2100 over the natural range of more than 30,000 marine and land plants and animals in order to predict precisely when, under a range of climate-change scenarios, each habitat is exposed to unprecedented and potentially damaging conditions.

For more than 70% of species, exposure to temperatures beyond previous limits occurred abruptly and simultaneously, sometimes within a decade. Under a high-emissions scenario, this struck tropical oceans by 2030, and tropical forests and higher latitudes by 2050.

Delaying such catastrophic disruptions by reducing greenhouse-gas emissions could give species valuable time to adapt, the authors say.