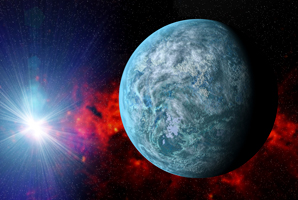 A frozen super-Earth could be orbiting one of the Sun’s nearest stellar neighbours.

Astronomers have been searching for planets around Bernard’s star — the second closest star to our Sun at 6 light years away — for decades without success.

Now, a team that included researchers from the Spanish National Research Council combined 20 years of observations from seven global telescopes and spotted a periodic wobble in the light signal from Bernard’s star. This wobble could be caused by the gravitational pull of a planet at least three times as massive as the Earth, the team postulates.

Despite orbiting as close to its star as Mercury to the Sun, the planet is frozen over, with surface temperatures around −170 degrees Celsius. This puts it well outside the habitable zone in which liquid water can exist, and on the ‘snow line’ — the distance from the star beyond which even gases become solid.

Next-generation telescopes could be used to probe the properties the exoplanet’s atmosphere.