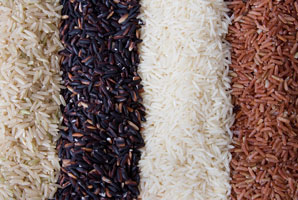 The complete sequencing of 3,010 rice genomes has revealed millions of genetic variants that could help plant breeders develop new and improved varieties of this staple food.

Researchers from the Chinese Academy of Agricultural Sciences, and more than a dozen other institutions, discovered around 29 million single DNA letter variants, 2.4 million small insertions or deletions of DNA and more than 90,000 complex structural variations circulating in the genomes of a diverse collection of Asian cultivated rice strains.

The researchers also identified in excess of 10,000 new rice genes. Plus, they found evidence for genetic sub-populations that matched the geographic origins of varieties across Asia, as well as genetic evidence that the plant was domesticated several times in India and China many thousands of years ago.

All of the data are now publicly available to help speed up the breeding of rice varieties with greater yields, drought resistance, or other beneficial traits.