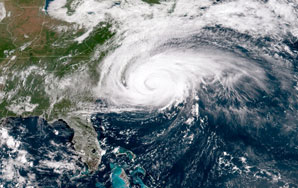 Countries sitting comfortably in the mild climes of the mid-latitudes could be exposed to tropical cyclones as the climate zone favouring their formation expands.

Tropical cyclones traditionally form in the tropical climates on either side of the equator, but they have been edging towards the poles in recent decades. A team that included researchers from the University of Melbourne compared where cyclones formed between 1980 and 2014 with regional changes in Hadley circulation — the tropical atmospheric circulation system caused by heat rising at the equator and sinking around 30 degrees north or south. Their analysis suggests that the tropics have been expanding, and more markedly since 1998, resulting in a poleward shift in the formation of tropical cyclones.

If the tropics continue to expand as predicted, more cyclones could occur over regions that are unprepared for such extreme, and potentially damaging, events.