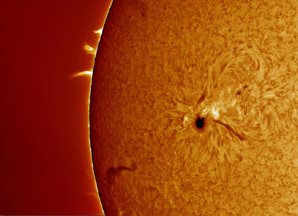 Large-scale oscillations in sunspots have been identified for the first time, offering a new way to monitor the processes going on in the Sun’s interior.

Sunspots are cooler regions on the Sun’s surface that are caused by intense magnetic fields. They have been predicted to oscillate like the surface of a timpani drum, but so far only few small-scale oscillations have been spotted.

Now, a team led by researchers from Queen’s University Belfast in the United Kingdom has identified large-scale oscillations in a sunspot about three times the diameter of the Earth.

High-resolution data obtained using the Dunn Solar Telescope in New Mexico was modelled using a model of waves that involve both sound and magnetism.

This discovery offers solar physicists a new way to probe what is going on below the Sun’s surface.