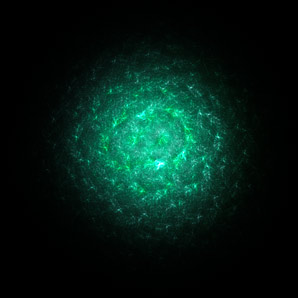 The formation of a super-dense, ultracold plasma in the lab gives plasma physicists uncharted territory to explore.

Plasmas are gases in which the atoms have been stripped of some or all of their electrons. They are formed under extreme conditions such as lighting strikes and in the interiors of stars, making them difficult to investigate in the lab.

Now, six researchers at Universität Hamburg have made an extremely dense, ultracold plasma in the lab. They did this by striking a few thousand ultracold atoms of the metal rubidium with an extremely short laser pulse.

The physicists used to system to investigate ultrafast cooling of electrons, observing their temperature plunge from just below 5,000 degrees Celsius to ten degrees above absolute zero in half a microsecond.

The plasma is roughly a million times denser than previous plasmas made from ultracold atoms. As such it opens up unexplored ground in plasma physics and is promising for gaining insights into less accessible plasmas that exist in nature.