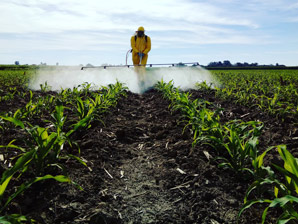 An analysis of the structure of an insect-killing protein produced by soil-dwelling microbes could lead new pest-control strategies for the agriculture industry.

The bacterium Bacillus thuringiensis secretes the insecticidal protein Vip3Aa, which is effective against many butterflies and moths. The protein is used as a pesticide to protect crops from pests. It gets converted into a toxic, insecticidal form when ingested by butterflies or moths but beyond that its mechanism is unknown.

Now, a team led by scientists from the Spanish National Research Council has used cryo-electron microscopy to detail the molecular architecture of Vip3Aa.

They found that the inactive ‘pre-toxin’ consists of four parts arranged in a pyramidal shape. Enzymes found in insect guts then cleave part of the protein, transforming it into its active structure.

The high-resolution structural information and insights into the activation mechanism of Vip3Aa should help biotechnology companies to engineer new insecticidal proteins that have greater stability and potency.