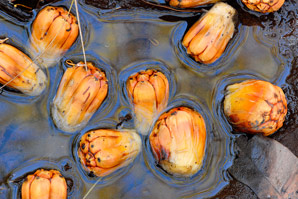 Charred leftovers of food cooked 65,000 years ago have revealed that humans had a more plant-based diet than previously thought.

It is generally thought that early humans wandered wherever there was plenty of high-calorie and convenient food, such as meat. In Australia, there is little evidence that plant foods, particularly those requiring preparation, were very important until farming emerged.

A team that included researchers from the University of Queensland analysed charred plant remains from the Madjedbebe rock shelter in northern Australia, preserved during a period of dense human occupation 65,000 to 53,000 years ago. They identified ten different edible plants, including forest fruits and nuts, but also seeds that needed grinding and stem vegetables such as palm that must be peeled and cooked before eating.

The findings show that early Australians got important carbohydrates, fats and proteins from foraged plant foods as well as meat.