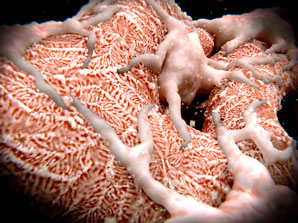 A metabolic by-product created by intestinal bacteria could serve as a prognostic biomarker and a drug target for diabetic kidney disease — a leading cause of end-stage renal failure.

A team led by scientists at the Tohoku University Graduate School of Medicine found that phenyl sulfate levels in the gut increased with diabetes progression in rodent models. They also showed that phenyl sulfate was toxic to kidney cells called podocytes. Exposure to the metabolite caused excess albumin protein to pass from blood to urine — a condition known as albuminuria.

A drug that inhibits the microbial enzyme that produces phenyl sulfate helped protect the kidney from damage in the mouse model. And clinical data revealed a significant correlation between phenyl sulfate concentrations in the blood and rates of albuminuria in a cohort of patients with diabetes.

These findings highlight the potential of using phenyl sulfate as a modifiable target for preventing and treating diabetic kidney disease.