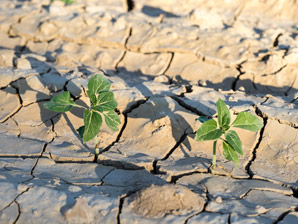 Manipulating the perception of a single type of plant hormone, brassinosteroids, may be enough to make crops drought resistant without compromising their growth.

Now, researchers at the Spanish National Research Council and elsewhere studied the effect of mutations that affect the perception of brassinosteroids, which are known to play a role in the stress response of plants.

The inactivation of most brassinosteroid receptors caused both drought tolerance and reduced growth. But increasing the expression of a specific receptor produced drought resistance without affecting growth. The team showed that overexpression of this receptor caused plants to increase the production of certain sugars and metabolic compounds, priming them to cope with drought.

These findings point the way towards developing drought-resistant crops.