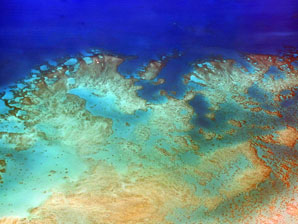 Deep reefs are not beyond the reach of coral bleaching due to warming seas.

Marine conservationists harbour hope that corals dwelling deep below the surface are safe from global warming.

A team that included researchers from the University of Queensland analysed sea temperatures on the Great Barrier Reef in Australia at depths between 5 and 100 metres. The data was recorded in 2016 when record-breaking surface temperatures bleached more than 60% of the region’s shallow coral (between 5 and 25 metres deep).

The team found that a seasonal current moving warm water to the surface initially kept deeper coral cooler. But once this current subsided, temperatures rose above the seasonal average, even at depth, bleaching 40% and killing 6% of coral 40 metres below the surface.

The depths provide some coral species a retreat from the summer heat, but prolonged periods of extreme warming could threaten the biodiversity of deep coral.