Dynamic peptide libraries for the discovery of supramolecular nanomaterials 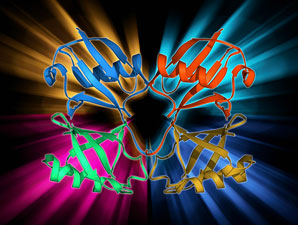 A team led by researchers at City University of New York has discovered how to pick the best starting materials for making functional nanostructures.

To build things like smart drug delivery nanocapsules, researchers often turn to nature. Peptides that re-order their component amino acids, can be programmed to self-assemble into almost any structure imaginable.

But this vast potential presents a predicament; given the number of possible peptide sequences, it can be hard to find the right one for the task. To do this, the team prepared a library of dipeptide structures, added an enzyme that broke apart peptides, then stepped back to watch. Over time, peptides formed and were cleaved, and sequences with the strongest tendency to self-assemble came to dominate the mixture.

By altering the reaction conditions, different sets of useful peptide sequences formed. The process could be automated to explore even more peptide sequence space, the researchers say.