Electron crystallography for determining the handedness of a chiral zeolite nanocrystal 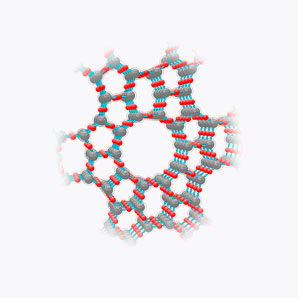 A Chinese-Swedish team has developed effective ways to determine the absolute structure of a chiral crystal.

Ensuring a drug molecule has the correct chirality is a critical stage of pharmaceutical production. A chiral molecule can exist in two mirror image forms, akin to a left and a right hand. Usually, only the drug form with the correct ‘handedness’ can properly ‘shake hands’ with its biological target.

Porous crystalline materials such as zeolites can also be chiral, and can help generate drugs with the desired handedness. The crystal can either filter out the incorrect mirror image form as a mixture passes through its chiral pores, or it can host a catalytic chemical reaction that makes only the desired form of the drug. But first, the handedness of the crystal itself must be established.

A team including ShanghaiTech University researchers have developed two efficient, practical ways to establish crystal handedness. Firing a beam of electrons at the crystal and observing the way the beam is scattered, rotating the crystal and repeating the process, then comparing the results, is one option. The alternative uses an electron crystallography technique called precession electron diffraction (PED). Each method is particularly good for analysing small chiral crystals.