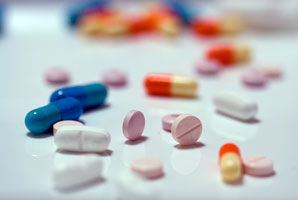 The binding of an anticancer agent to the proteins that spool around DNA helps an unrelated drug — one used to treat rheumatoid arthritis — to bind more efficiently in cancer cells.

Together, the two drugs kill many more ovarian cancer cells than either agent alone.

A team co-led by researchers at Nanyang Technological University showed that the therapeutic synergy results from a ‘domino’ model of drug attachment to the histone proteins that package DNA. After the anticancer drug RAPTA-T binds the DNA, it changes the shape of the histone in a way that makes it easier for the antirheumatic agent auranofin to bind at a distant site, different to the one where it normally acts.

While this kind of ‘off-site’ activity often leads to problematic side effects, in this case, it enhances the drugs’ destructive power against tumours.