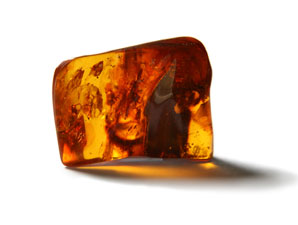 The oldest fossil of a social parasite, a badly behaved beetle, has been discovered in a 99-million-year-old piece of amber.

Ants and termites thrive in cooperative colonies where care of the young is shared and labour is divided up for the greater good. This community spirit leaves them vulnerable to exploitation as opportunistic insects can sneak into the colony to sleep in their nests and eat their eggs.

A team led by a researcher from Kyushu University identified a new species of beetle fossilized in the same piece of amber as the earliest evidence of a termite colony. The Mesosymbion compactus, a species of rove beetle, has a teardrop shaped body and blunted antennae on its half-shielded head. These defensive features are typical of critters that face regular hostility and suggest that the beetle had evolved to survive by barging into unsuspecting insect colonies.

Social parasitism may have evolved in alignment with the rise of social insects, the authors say.