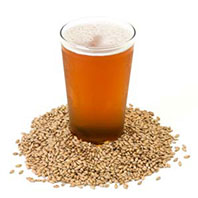 Thirsty early farmers may have bred barley specifically to brew beer, according to a study of the gene that controls when barley grains sprout.

Seed dormancy is how long a grain waits in appropriate conditions before sprouting. In barley, a long dormancy is favourable for food production with the seed keeping through long, dry summers and sprouting in the cooler autumn. But a shorter dormancy is better for producing beer and whiskey because brewers need germination to commence the brewing process. Researchers at Okayama University and their colleagues studied over 5,000 barley strains to find a gene, Qsd1, that controls dormancy. Curiously, barley carrying a mutation in Qsd1 that gives rise to short dormancy shares its ancestry with a long dormancy, food-producing barley that was first domesticated some 10,000 years ago on the eastern shores of the Mediterranean Sea.

This study suggests that controlled germination was used in early agriculture to satiate ancient appetites as they shifted from foods to fermented beverages.