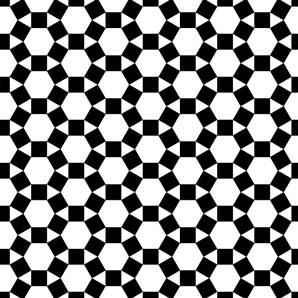 It’s a bit too small to cover the floor of the laboratory, but chemists in Europe have used self-assembling molecules to create a nanoscale version of an Archimedean tiling pattern.

Archimedean tilings are semi-regular patterns in which tiles of different shapes tessellate to form the pattern. A team, including chemists at the Technical University of Munich, has now created a supramolecular version of the (3.4.6.4) Archimedean tiling, which consists of hexagonal, square and triangular tiles.

The team created the pattern from a small organic molecule, ethynyl-iodophenanthrene, selected because it was not quite symmetric. One aspect of its dissymmetry was that one end of the molecule featured an iodine group, while the other had an alkyl group. Another aspect was a slight curve in its backbone.

When placed onto a smooth silver surface and heated, the organic molecules arrange themselves into pairs, held in place by chemical bonds formed with the silver atoms below. Influenced by the curved backbone, the bonded pairs tessellate across the silver surface in the (3.4.6.4) Archimedean pattern.