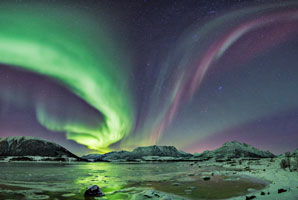 Pulsating auroras are a rare sight in the night sky, and it has been difficult for scientists to confirm theories about how they form. Now, a collaborative team, including researchers from Kanazawa University, has directly observed how the vibrant flashes form.

Researchers used Japan’s Exploration of energization and Radiation in Geospace (ERG) satellite and ground-based cameras from NASA’s THEMIS mission to observe that electrons bouncing around Earth’s magnetic fields were scattered by a type of plasma wave called a ‘chorus wave’.

A burst of these waves causes the electrons to fall into the upper atmosphere, collide with atoms and molecules there, and then pulse as bright, colourful lights for up to tens of seconds before disappearing. The team detected these charged particles using a sensor aboard the satellite, found that their flux was sufficient to generate a pulsating aurora which was detected simultaneously using the cameras on the ground.

“By analyzing data collected by the ERG spacecraft more comprehensively, we will reveal the variability and further details of plasma physics and resulting atmospheric phenomena, such as auroras,” lead author, Satoshi Kasahara said.