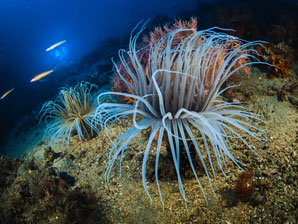 The acidification of the North Atlantic Ocean could endanger deep-water corals within 30 years.

The world’s oceans have absorbed around 30% of the carbon dioxide released into the atmosphere since the Industrial Revolution. This has reduced levels of a calcium carbonate called aragonite, from which many corals build their tough outer layer.

A team that included researchers from the Spanish National Research Council used global observations of marine carbon dioxide between 2002 and 2016 to calculate the changing depth of the aragonite saturation horizon (ASH), above which corals can survive.

The ASH has risen by almost 15 metres each year in parts of the North Atlantic, and the researchers predict that it could ascend from its current 2,000 metres to 1,500 metres within three decades if carbon emissions continue to rise unchecked. The plight of corals below this depth will be worsened by acidified waters descending on deep-ocean currents.

The loss of cold-water corals could endanger many marine creatures that use these protective ecosystems as breeding grounds.