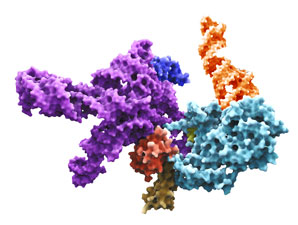 Random malfunctions of the machinery that translates genes into proteins help regulate protein synthesis, according to new research.

Researchers at University College Cork observed that ribosomes, the molecular machines that synthesize proteins according to the instructions in RNA, occasionally misread the final instruction in the AMD1 gene. Rather than stopping, ribosomes sometimes continue until reaching a second stop signal further down the RNA. Malfunctioning ribosomes run into the stalled ribosomes ahead of them, piling up in a queue.

Eventually, the queue covers the end of the gene and prevents incoming ribosomes from accessing it, blocking protein production. The rate of translation and the number of protein molecules produced depend on the rate at which stalled ribosomes disengage and the distance between the two stop signals.

The team found genetic signatures of this mechanism in 80 vertebrate species, suggesting that it is widely conserved.