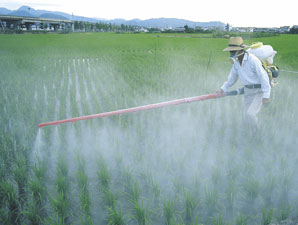 Cutting the amount of phosphorous in rice grains could reduce the need for harmful fertilizers.

Phosphorous is a vital nutrient for plant growth, so farming crops demands the heavy use of phosphate-based fertilisers. Phosphorous is stored in grains as the chemical phytate, which cannot be digested by humans and most animals. After consumption it passes into waterways, increasing the growth of aquatic organisms and disrupting the ecosystem.

A team including researchers from Okayama University have identified the gene which delivers phosphorous to rice grains and engineered a rice plant with this gene deactivated. The resulting grains had 20 per cent less phosphorous than regular rice. Productivity was unaffected and the phosphate was instead held in the leaves, which are left in the field after harvesting. This means the nutrient can be reused by crops the following year.

Similarly modified crops could reduce the financial and environmental costs of fertilizers, the authors say.