Mantle dynamics inferred from the crystallographic preferred orientation of bridgmanite 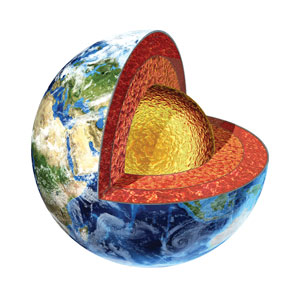 Changes in the crystalline structure of deformed rocks give a glimpse of the dynamics of the mantle — a 2,900 kilometre rocky layer between the Earth’s crust and core.

When seismic waves, generated by earthquakes, flow into a new rock type, they can split into two waves that travel at different speeds. This effect, called anisotropy, has been detected in Java, Indonesia and Peru, among other areas, but the cause of the diversion was not confirmed.

To investigate, researchers at Okayama University and their colleagues set a deformation apparatus to simulate conditions within the mantle and used it to squeeze bridgmanite, the most abundant rock in the mantle. The rock’s crystals became aligned with the direction of the squeezing, which created a new rock structure.

The authors suggest that the anisotropy observed in Java and Peru results from earthquake waves passing through bridgmanite that has been deformed by slabs of the Earth’s crust plunging into the mantle.